Recently two groups from the UK and the NIH found that a large group of patients with recurrent sinopulmonary infections (with early presentation of bronchiectasis) associated mainly with splenomegaly had mutations in the PI3Kδ gene . Most of the patients were lymphopenic with low IgG2 and some time high IgM. Defective response to vaccines and viremia due to CNV and EBV was found in most patients (see table). This is a autosomal-dominant  condition which leads to gain of function leading to increase apoptosis and over expression of senescent effector T cells. This condition was named APDS- Activated PI3K δ Syndrome.

Many more cases with this mutation has already been found in other PID centers and thus it should be included in the genetic analysis of patients with recurrent bacterial pulmonary infections especially if a family history exists. 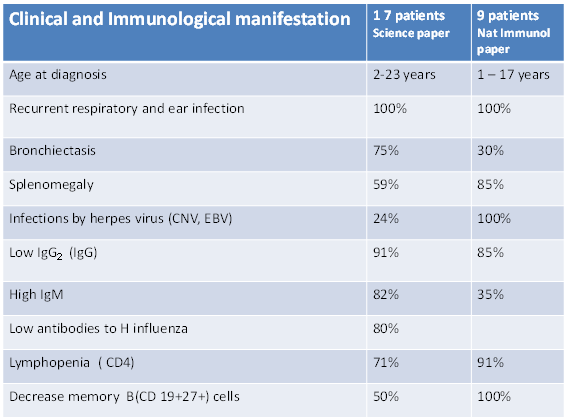